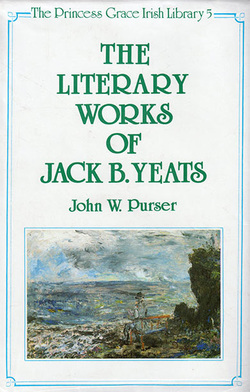 Purser's The Literary Works of Jack B. Yeats was published in 1991 by Colin Smythe and (in the USA) by Barnes & Noble as number 5 in the Princess Grace of Monaco Memorial Irish Library series.

Purser's other contributions to Yeats studies include

Reviews of R.Skelton (Ed.) The Selected Writings of Jack B. Yeats; and the exhibitions Images in Yeats; and Jack B. Yeats: The Late Paintings. In: W.Gould (Ed.) Yeats Annual No.10, Basingstoke 1993.

"Voices of the Past: Jack Yeats and Thomas MacGreevy in Conversation" In: W.Gould (Ed.) Yeats Annual No.11, Basingstoke 1995.

Reviews of The Literary Works of Jack B. Yeats

“ . . anyone reading his admirable and challenging study is certain to become excited . . for he goes a long way
towards proving that these writings are much more complex, profound and original than has previously been admitted, . . His arguments are persuasive and his analyses thorough . . He has researched the material thoroughly and made a number of extremely valuable discoveries. He has challenged (correctly, I believe) several earlier interpretations and has sifted through the complicated symbolism most efficiently. His prose style is elegant, witty and sometimes trenchant, and he can be humorous. . . John Purser has done a good deed in
bringing Jack B. Yeats before us. May this book lead to the republication of all those brilliant and little known works of a Master.” (Robin Skelton, in Warwick Gould ed. Yeats Annual No. 10 1993 pp.313-314.)

“I cannot resist the temptation to close this essay with the fine and compassionate words with which John W. Purser closes his book::” William Murphy, Family Secrets, Syracuse 1995, p.327, n.230, p.467.

“His book is a marvellous and meticulous work of literary criticism, perhaps a cornerstone of Jack Yeats
studies, where no detail is ignored, and everything possible explained, with a sensitivity to Yeats’s personal idiosyncrasies, and to his background in Dublin. With all of this background John Purser, by reason of his own descent, is familiar. He writes with a dry wit and perspicacious view. . .” Hilary Pyle, Irish Arts Review 1993,
pp.263-264.


“The writings of Jack B. Yeats have attracted less detailed attention than his paintings. Clearly one of the leading painters of the twentieth century, Jack Yeats’s written work has been obscured by the literary achievements of his more celebrated brother William. Their father predicted that ‘Some day I shall be remembered as the father of a great poet, and the poet is Jack’, and Purser goes a long way to justifying why this prophecy may yet be fulfilled. He provides a stimulating context for Jack Yeats’s plays and novels – of particular interest to specialists in Irish theatre and of twentieth-century drama being the detailed and tantalizing insights into Yeats’s ‘Plays for the Larger Theatre’. Purser is clearly fronting a campaign to see Jack B. Yeats’s writings back in print, and this
volume should play an influential part in forcing the hand of publishers to meet what is likely to become an increasingly vigorous demand.” Padraig Tolan,
Review in New Theatre Quarterly, Volume 8, Issue 31, 1992, p.292.

“Highly worthwhile book by the great grandnephew of the Irish painter Sarah Purser . . . would be an appropriate acquisition for college and university libraries." Choice.